Urban history is one of the oldest forms of history practiced in Australia. Early local historians like A.W. Greig were interested in cities and its spaces. Similarly, since World War II, the Australian city has been subject to much local and academic historical analysis, and remains a perennially popular topic. After all, as Graeme Davison argues, Australia was effectively ‘born urban’. Since colonisation, much Australian history has played out in its cities even when this is not made explicit. After all, history must happen somewhere. Most often in Australia – where urbanisation rates hover around 80-90% – this is in cities. 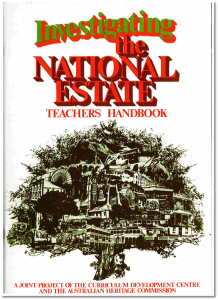 I write this blog from Day One of the 34th Australian Historical Association (AHA) conference in Sydney where numerous sessions involve the Australian city. It is exciting to be here in Sydney thinking about urban history. This is Australia’s first and largest city. (As a Melburnian – who is ‘camping out’ – I feel an uncontrollably silly urge to add ‘currently’ largest city; since Melbourne has been larger and is projected to become larger once again. Not that size is what makes cities wonderful, and Sydney is a truly wonderful city.)

This is my second AHA conference. At the 2012 AHA conference in Adelaide, I participated in a session called ‘urban history’ in which regional towns, shopping arcades and pleasure gardens featured. For this year’s conference, I’m presenting a paper on the relationship between cities and the national estate; a heritage concept deployed in Australia in the 1970s until the early 2000s. After I heard there were numerous concurrent streams on Gough Whitlam, I assumed this was where I would be located in the programme. It was the Whitlam government that at first used the term ‘national estate’ in place of ‘heritage’. Fortunately not. After all, I’m foremost an urban historian, not an expert on Whitlam.  I’m in the ‘histories of place’ stream alongside Frank Bongiorno and Bianka Vidonja Balanzategui.

Aside from highlighting this week’s urban history programme, I also wanted to touch upon the themes of these sessions. For me, I would feel as comfortable in a session on space as I would in a session on place. Ideas of space, place, cities and towns are different yet intimately related; all are embroiled in social relations. Each paper – whether on the bicentenary, neighbours, holidaying or other topics – intersect with these urban history concepts. Many of these papers would sit comfortably side by side with papers from other sessions. All in all, they make for an excellent conference for histories of the Australian city.

[The image used alongside this post is the cover to a 1980s secondary school teaching kit on Australia’s national estate. The graphic shows recognisable urban and non-urban places from across Australia.]