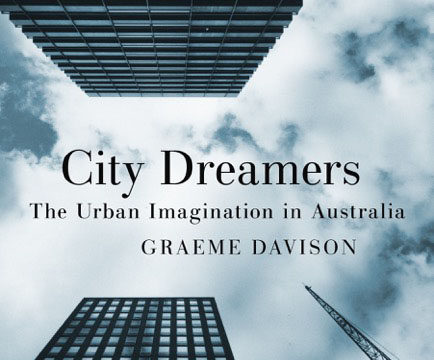 Here is my book review of City Dreamers: The Urban Imagination in Australia by Graeme Davison. This review was published in Urban History journal in 2017, and reflects both on Davison’s important book and his broader contribution to the practice of urban history.

City Dreamers: The Urban Imagination in Australia (NewSouth, 2016), the most recent work of renowned urban historian Graeme Davison, brings together five decades of scholarship on the Australian city into one impressive volume. Davison is a foundational figure of the ‘Melbourne School of Urban History’, and since his retirement from Monash University, he has been more productive than ever. Reviewing his recent family history Lost Relations (Allen & Unwin, 2015) the contrarian historian John Hirst identified Davison as a ‘master historian’. In Trendyville (Monash University Press, 2014), co-authored with Renate Howe and David Nichols, Davison provided a captivating comparative examination of nationwide post-war battles that shaped Australia’s inner suburbs.

As with Davison’s The Use and Abuse of Australian History (Allen & Unwin, 2000), City Dreamers assembles previously published articles, book chapters and essays; this time, the Australian city is the central concern. Some eleven of the sixteen chapters have appeared in scholarly journals, the opening and closing chapters are reflective pieces originally published in literary journals, and sections of the volume pre-date his influential first book The Rise and Fall Of Marvellous Melbourne (MUP, 1978). This volume reflects the strength, adaptability and readability of Davison’s prose. All the older chapters have been revised and then interspersed with fresh material, and taken as a whole City Dreamers continues the trailblazing trajectory of much of Davison’s oeuvre.

City Dreamers historicises the Australian city from the arrival of British colonialists at Sydney Cove in 1788 to contemporary urban debates. In the process, Davison visits every Australian metropolis: from early Sydney and nineteenth-century Melbourne to twentieth-century Adelaide, Canberra and beyond. The volume begins with chapters on visual artists, social scientists, slummers, snobs and suburbanites. A third of the volume, these opening chapters take readers to the end of the nineteenth century. The balance of the volume then focuses on the twentieth century, with a continuing emphasis on the suburbs. Additional chapters discuss bohemian poets, motorways, Australian modernist urbanism – including architecture, decentralisation policy and the development of Canberra–and lastly cosmopolitanism. The chapters on suburbanisation and motorways might be most familiar to an international audience, given Davison’s important contribution to these fields. The inclusion of Indigenous urban dreamings in the closing chapter reflects his intellectual development over a period when questions and debates around settler colonialism have come to the forefront of Australian historical scholarship.

An outstanding fresh chapter focuses on historian Hugh Stretton and his Ideas for Australian Cities (1970). This work is possibly Australia’s most significant national urban treatise, and so Stretton becomes one of Davison’s many ‘city dreamers’. Drawing from Jonathan Raban’s Soft City (Harvill Press, 1974), Davison reads the Australian city through the accounts of ‘journalists, artists, engineers, doctors, social scientists and planners–who participate in the constant battle of ideas through which the city is made and remade’ (5). For Davison, these people were ‘intellectuals [who] aspired to see their cities through locally made lenses’ (12). In doing so, Davison accentuates at once local differences and international similarities as presented in the Australian city–with reference to his lifetime of research in urban history.

City Dreamers is more than a useful Australian urban history survey. It also makes Davison’s oeuvre accessible to a wider audience. A single volume now contains much of his influential urban scholarship. Its publisher NewSouth also straddles the academic and popular divide. However, this means that some compromises have been made: the entire book including endnotes and index is only 328 pages, when it might have been double that length, and what were previously footnotes have been printed as condensed endnotes. Unfortunately, the endnotes have some minor typographical errors, such as an incorrect year attribution. These comments must not detract, however, from Davison’s positive effort to democratise urban history, which also reflects his interest in public history. In addition to Davison’s engaging prose, every chapter opens with a handy abstract, which adds cohesiveness to the overall narrative; especially valuable for a volume that covers such a breadth of places and periods.

Via this overarching narrative, Davison shows that the limits of the Australian city have always extended well beyond their municipal boundaries; not only in historical scholarship but also in the minds of urbanists. Australia’s city dreamers recreated local and international ideas in their utopian quests to further their Antipodean cities. By assessing his city dreamers alongside people and events elsewhere their historical significance becomes clear. Similar to the United States, Australia struggled to recognise that it ‘was born urban and quickly became suburban’ (74). Like Britain, Australia rejected its existing cities at the turn of the twentieth century for an imagined suburban ideal. In this volume, urban historians might read about Australia’s city dreamers–such as social scientist W.S. Jevons and reformer James Barrett, writers Patrick White and Miles Franklin, journalists R.E.N. Twopeny and Keith Dunstan, architects Robin Boyd and Marion and Walter Griffin, and historians Charles Bean and Stretton – to understand why Australia’s cities are consistently (though not unproblematically) ranked amongst the world’s best places to live in the twenty-first century (236).

City Dreamers also assists urban historians in interpreting Davison’s contribution to the field. For instance, as a Melburnian Davison writes about his personal experiences of visiting a changing Sydney from the ‘Palisade Hotel’ (1), and subsequently confesses himself as a reformed modernist; growing up, he unconsciously absorbed post-war ‘modern’ ideas (180). Such an outlook still speaks to Davison and this volume’s optimism. Davison also makes the following astute observation about Stretton: ‘History and planning, Stretton had begun to see, were two sides of the same coin. In explaining events in the past, the historian was weighing the same combinations of facts and values by which the planner plotted–or could plot–the future’ (198). This revealing comment on the possibilities of historical scholarship resonates with a remark made about Davison many years ago. A 1982 commentary by historian Tom Stannage on Davison’s Rise and Fall critiqued its ‘analytical bias’, whilst praising his ‘controlled passion and humanity’. The same might be said about Davison almost four decades later, as historian Tom Griffiths has done in The Art of Time Travel (Black Inc, 2016). Davison’s City Dreamers shows that the urban historian should strive for clarity and rigour over jargon and fads; incisive scholarship is indeed timeless. Davison too is one of Australia’s most significant city dreamers.