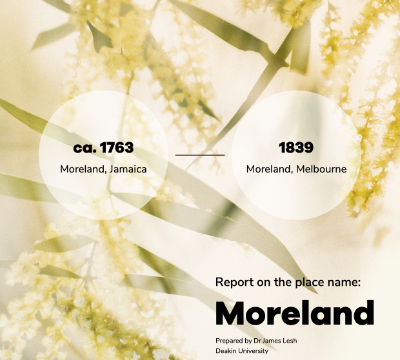 My report on “Place Name “Moreland”, prepared for the City of Moreland, in the inner north of Melbourne, has now been released. Adopting a historical archival approach, the report explores the links between the “Moreland” name and British Caribbean Slavery. It concludes that not only is Moreland named after the eponymous slave plantation in Jamaica, but that the early development of the area in Melbourne was funded by two further slave plantations in Jamaica and Barbados. The report demonstrates the continuing power of history and heritage in shaping our cities, places, and communities. Following my public lecture at Brunswick Town Hall on 7 April 2022, the research will inform discussions related to the re-naming of the City of Moreland.

The name “Moreland”, used to designate the municipality, road, and train station, has associational and financial links to eighteenth- and nineteenth- century Caribbean slave plantations. The name was first adopted locally on Wurundjeri Woi-wurrung Country by Scottish settler, doctor, speculator, and firebrand Farquhar McCrae (1806–1850). In October 1839, Farquhar acquired from the Crown, in the area’s first colonial land sales, property between present-day Moonee Ponds Creek and Sydney Road, either side of Moreland Road. Farquhar’s paternal grandfather Alexander McCrae (ca.1744/45–1796) had been the ‘Sugar Lord’ of the Moreland Estate, Vere, Jamaica. According to McCrae family records, at his death, Alexander’s estate may have been valued at £100,000, making him an extraordinarily wealthy man, a fortune generated from his slave plantation, the primary crop of which was sugar. His son William Gordon McCrae (1768–1829) spent his early childhood in Jamaica, and inherited advantage, privilege, and money generated from his family’s colonial assets. The McCrae family noted that the Moreland Estate passed on to the Mitchell family by the nineteenth century. Although not directly receiving inheritance from their grandfather’s estate, the children of William Gordon McCrae were aware of their family history and benefited from their family’s standing in Scottish and Australian society. Farquhar’s decision to call his Australian property “Moreland” accorded to his grandiose dreams for his colonial life in Melbourne, claiming prestige and distinction by invoking his family’s Jamaican colonial heritage. In financial terms, Farquhar’s property investments were, in part, funded by inheritance received following the death of his uncle, John Morison (1766–1838), the father of his wife Agnes. In Edinburgh, John had raised, supported, and educated Farquhar. The Morison family wealth was linked to the Windsor Castle Estate, St David, Jamaica. In Melbourne, Farquhar was noted in colonial records for his support of bringing ‘Indian coolie labour’ to the Australian colonies and for his punishment of an Indigenous person for stealing from him. Following business, political, and personal disputes, Farquhar in 1844 departed Melbourne for Sydney. A section of his Moreland property was, for some time, leased to his sister Mary Harvey, who was an awardee of slave compensation in 1836 for the Bay Estate, St Michael, Barbados. Farquhar died in 1850 and the Moreland property was subsequently subdivided in 1858. At that time, Moreland Road was built, followed by Moreland Station in 1884. Since the start of the twentieth century, the public record including books and newspapers has made clear that the “Moreland” place name was chosen by Farquhar after his grandfather’s Jamaican plantation. In 1994, the newly-created City of Moreland adopted this name. New academic research suggests that Australia’s colonisation had strong social, financial, and cultural links to British slavery, and so the story of Farquhar and Moreland was echoed elsewhere. More unique is that an Australian municipal authority has a direct naming link to a slave plantation.