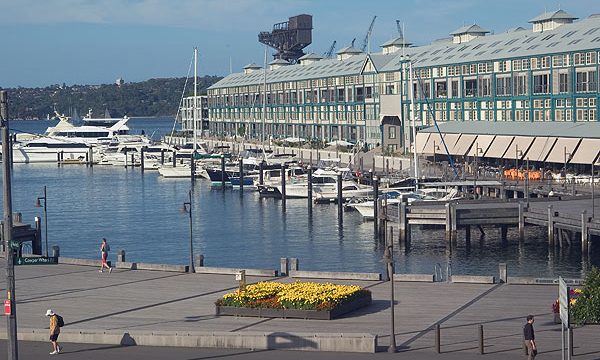 In 1992, Barry Cohen wrote in The Australian newspaper of the ‘heritage mafia’, who were imposing their narrow conservation perspectives on Sydney and its development, planning, and architecture. Within the heritage mafia, Cohen identified the National Trust and the Institute of Architects, politicians including Clover Moore, and ‘green ban’ unionist Jack Mundey.

Cohen was no opponent to conservation. He had previously served in the Federal Parliament for two decades, including as Minister for Heritage in the Hawke Labor Government, overseeing the Australian Heritage Commission. Cohen was, however, incensed by the response of heritage groups to the proposed redevelopment of the Woolloomooloo Finger Wharf.

The Battle Over the Woolloomooloo Finger Wharf

A disused early-twentieth-century maritime industrial site, the Finger Wharf had been subject to a heritage assessment. Archaeologist Don Godden identified its aesthetic, historical, technological, and social values and so any ‘adaptation of the place [must] involve no change to culturally significant fabric’.

State authorities in Sydney, including the New South Wales Heritage Council, first placed a provisional conservation order over the site, but then decided in 1990 to demolish it for a new development. According to its critics, in the Sydney Morning Herald in 1989, the Heritage Council’s ‘membership tends to reflect the interests of various government agencies and departments rather than strictly heritage concerns’.

The future of the Finger Wharf triggered a major heritage dispute and attracted national attention. Sydney Lord Mayor Jeremy Bingham (a property developer), Liberal Premier Nick Greiner, and Prime Minister Paul Keating endorsed the demolition. Newspapers reported that the ambition of these local, state, and federal politicians was to return the area to its ‘natural state’, an ‘environmentally pure’ outcome.

In opposition, a citizen group called the Friends of the Finger Wharf formed and barricaded the site. Construction unions placed a green ban on it, preventing its development for environmental and social reasons. Director of Conservation at the University of Sydney, Trevor Howells, wrote in the Sydney Morning Herald of the need to democratise public understandings of heritage: ‘aesthetic, architectural or historical appeal’ need not only apply ‘in high cultural terms’. European architecture figures Philippe Robert, Richard Rogers, and Patrick Heron, on visits to Sydney, endorsed this position too.

The Finger Wharf was taken to be ideally suited for adaptive reuse, reflecting the shift to postmodernism and contextual awareness in cities and architecture. In 1992, quite remarkably, following an inquiry, state authorities u-turned to endorse this position. They accepted a tender to adaptively reuse the Finger Wharf – by then, ravaged by fire – into a luxury apartment, hotel, and hospitality complex. In 1994, in the Sydney Morning Herald, Cohen questioned how this outcome preserved ‘forever the heritage of arriving migrants and departing service personnel’?

At the time, contemporary historians interpreted the dispute as a case of development and political priorities trumping community and conservation interests. From the late 1980s, urban development was, indeed, accelerating across Australia’s capital cities. This left many people within conservation disheartened that the wins of the 1970s heritage movement and the green bans were seemingly being eroded. Yet the Finger Wharf dispute also enabled the public airing of the growing cynicism towards heritage and its conservation among politicians, authorities, sections of the architecture and planning professions, and members of the public.

In the final two decades of the twentieth century, urban heritage remained a disputed terrain, despite the institutionalisation of conservation in the 1970s. The aim of the field’s new values-based approach, embedded within the Burra Charter (1979), was to professionalise and rationalise conservation: to take the heat out of decision making. In fact, conservation still was a contested, subjective, and contextual activity.

The turn of phrase, ‘heritage mafia’, became a powerful moniker to encompass frustrations and grievances held towards the conservation field. It conjured imagery of a cabal or closed shop exercising a hidden or malign influence over cities and places.

As with much of the Australian heritage lexicon, the phrasing had come from the United Kingdom. In 1987, British cultural critic Patrick Wright evoked the conservative ‘heritage mafia [who] may want to turn the country into a totalitarian theme park in which the locals are expected to play the part of loyal yokels’.

The Australian ‘heritage mafia’ incorporated the broadly progressive politics of the conservation field, which lacked Britain’s conservative flank. Other than, perhaps, the development-oriented private-sector heritage consultant.

In 1990, historian David Dunstan wrote of ‘Melbourne’s heritage mafia [whose] principal vehicle was, and is, the typed and photocopied document – the heritage study’. In Dunstan’s rendering, had the conservation field achieved its objective of political ambivalence and technical rationality? The public debate suggested otherwise.

The criticisms of conservation were not merely a complaint with the field’s propensity to question rampant commercial development. It was also driven by the perception that conservation opposed incremental and reasonable urban change by valorising old buildings for their own sake. Critics did not typically suggest that conservation was unimportant, but rather brought into question how it was being practiced, particularly in its relationship to other urban, design, and social concerns. That the phrase ‘heritage mafia’ ultimately stuck suggests the acrimony around conservation.

Heritage and the Community

Meanwhile, among heritage groups, a perspective circulated that public and political interest in urban heritage was in decline. In 1990 in Melbourne’s Age newspaper, the state-based National Trusts identified a growing complacency towards conservation among authorities and communities. Rodney Davidson said, ‘I thought that the war had been fought and won…But there are new skirmishes almost every week’.

In the long shadow cast by 1970s heritage movement activism, Davidson’s comment was not only a response to growing development pressures. The problem was that places of cultural significance or heritage value, from the perspective of conservationists, could still be demolished. Responsibility was attributed to unsympathetic authorities, self-interested property owners, and the wider community.

Davidson’s comment also reflected the difficulties that the National Trusts had adapting to the institutionalisation of conservation as a profession and within law, policy and planning systems. Their membership numbers levelled in the 1980s and then fell in the 1990s. Their financial positions also deteriorated. Some of these state bodies teetered on the edge of bankruptcy, beset by mismanagement and scandal.

Although difficult to measure, there was little evidence to corroborate the claim that communities were no longer interested in heritage. In 1990, in The Age, journalist Suzy Freeman-Greene wrote, ‘Public awareness of Australia’s European cultural heritage has grown enormously in the past 20 years. Inner-city terraces now sport heritage colours when once they displayed their owners’ football allegiances’.

When claims of community apathy towards heritage were made, conservation appeared bound to the assumptions, conditions, and motivations of bygone days. The 1970s, the era of a popular heritage movement and green bans, had been a transformative decade characterised by widespread popular protest, remarkably sympathetic political leadership, and beset by an economic crisis that halted urban development. Before then, in the 1950s–60s, the conservation field led by architect Robin Boyd had also held the view that the public restrained conservation.

If conservation had only ever truly inspired the community for a single decade in its history, then that spoke to the need for more responsive agendas that addressed evolving community aspirations for heritage places. The apparent failure of conservation to evolve with the times and adapt its outlook and approaches was captured by Cohen in his conjuring of the ‘heritage mafia’.

Dr James Lesh is an urban historian and Lecturer in Cultural Heritage and Museum Studies at Deakin University in Melbourne, Australia. His research explores the theory and practice of heritage conservation in the twentieth and twenty-first centuries. He has also published widely in Australian urban history.

This work is licensed under a Creative Commons Attribution-NoDerivatives 4.0 International License.