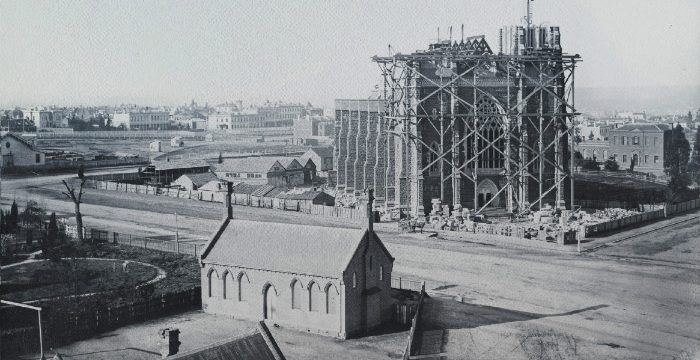 This book review is published in History Australia, 2022.

Melbourne’s first Roman Catholic Archbishop, James Alipius Goold (1812–1886) may have once been considered an unlikely subject for not just one but two edited book volumes. Minimal attention had been devoted to him in the historiography of religion, which characterised him as an eccentric and detached church administrator. Otherwise, Goold had not been deemed a central figure in early colonial Melbourne, where he led the diocese from its establishment in 1847 until his death some 38 years later. The ambition of The Invention of Melbourne (2019) and its follow-up The Architecture of Devotion (2021), edited by Jaynie Anderson, Max Vodola and Shane Carmody, is to provide a rich and textured account of Goold and his role in shaping this burgeoning colonial metropolis. The book chapters focus on art, artefacts, architecture, culture, and religion, at their intersection with Goold and his professional and social circles, which were strongly Catholic and Irish.

The two volumes are the outcome of an Australian Research Council project called ‘The Invention of Melbourne: A Baroque Archbishop and Gothic Architect’ (2017¬–21). The chief investigators were the book editors: art historian Jaynie Anderson (University of Melbourne), historian of religion Max Vodola (University of Divinity), and public historian Shane Carmody. Goold is the Baroque Archbishop – for his attraction to and collection of High Baroque (1642–1749) art works. The Gothic Architect is William Wardell, who was influenced by English architect Augustus Pugin (1812–52) and his Gothic revivalism. Wardell was ultimately engaged by Goold to construct St Patrick’s Catholic Cathedral, one of Melbourne’s great buildings, located on Eastern Hill in the Parliamentary precinct. As just one albeit important figure in Goold’s life, Wardell is a lesser emphasis of the books. Wardell is subject to chapters in the first volume by architectural historian Ursula de Jong and heritage practitioner Peter Lovell. Paola Colleoni intermingles the lives of Wardell and Goold in chapters in both volumes.

Both books adopt a similar structure. Following a short introduction, the chapters are thematically organised into three parts in the first volume and four parts in the second volume. The chapters vary in length though all feel concise. A total of 25 authors contributed to the two volumes – of which six are included in both volumes. They specialise in several strands of history, mix university and independent affiliations, both Australian and international, and are at various career stages. Even so, the collection is especially cohesive, owing to the in-person conferences and other collaborations among the contributors, as well as the skilful hand of the editors and publisher. This is clearly a project of energy and passion, characterised by engaging and lively writing. The second volume followed the enthusiasm around the first volume and its research findings, especially related to arts and culture.

Goold was born in 1812 to a wealthy family in Cork, Ireland. Of the Augustinian order, he studied in Rome and Perugia before his ordination in 1835. In the first volume, Vodola traces Goold’s origins. This chapter is complimented by Colin Barr who places Goold in his transnational Irish and Catholic contexts. After a fortuitous encounter with William Ullathorne, Goold followed Ullathorne’s lead, both in electing missionary work in the Australian colonies and then becoming a protégé of John Bede Polding, the Archbishop of Sydney. Peter Cunich writes about Goold’s first posting to Campbelltown, where he worked for ten years; furthering the tradition of evangelism, constructing buildings, institutions, and community. Arriving in Melbourne just prior to the gold rush, Goold then at once witnessed and shaped the city’s massive physical, economic, social, cultural, and spiritual expansion over the next four decades through to the 1880s ‘Marvellous Melbourne’ period. In the second volume, Mark G McGowan finds international comparisons between Goold of Melbourne and Irish archbishop John Joseph Lynch of Toronto.

Using funds from church activities and benefactors, Goold amassed a remarkable collection of art works – especially European works, notably of the High Baroque, but also some local examples – for Victorian churches and other institutional buildings (many of which he had commissioned or acquired). He travelled extensively over his life, often returning to Rome, providing opportunities to make acquisitions. Anderson portrays Goold as ‘the most important collector of European art in colonial Victoria’ for the hundreds of works he imported. An influence was contrarian Anglo-Irish art historian Anna Jameson, argues Anderson in volume two. Klaus Krüger in the first volume and Rafael Japón in the second volume contextualise Catholicism’s relationship to Renaissance and Baroque Art, in Italy and Spain, respectively. The importance of art and architecture of these periods for Goold and the Catholic Church is provided in chapters in volume one by Rachel Naughton, Callum Reid and Angelo Lo Conte. Complimenting Anderson’s second volume chapter, a more secular account is also offered by Ruth Pullin exploring Goold’s friendship with painter Eugene von Guérard.

Goold also had a notable private library, as identified by the research project, which had been largely dispersed. Its most significant item was a first Paris edition of the 25-volumes of Giovanni Batista Piranesi, dating from 1800 to 1807, and comprising more than 1000 etchings and engravings (now held by the University of Melbourne). In the first volume, Wallace Kirsop considers the Australian nineteenth-century book trade. This chapter is complimented in the second volume by Kevin Molloy’s contribution on James Stanley and Catholic print publishing in colonial Melbourne. Similarly, in the first volume, Shane Carmody, Kerrie Burn, Nick Gellatly and Huw Sandaver jointly examine Goold’s library from the incomplete inventories. In the subsequent volume, Huw Sandaver contemplates Victor Front, Joseph Aresti and the evolution of European print technology in Goold’s extant book volumes.

Most chapters adopt the perspectives of the men and women in Goold’s life, together with the art, artefacts and architecture that engaged him. Naturally, histories of the Australian Catholic Church features strongly. Not only Cunich writing on Polding and Goold during the Campbelltown period, but also, in volume two, Matthew Beckmann on Patrick Bonaventure, Melbourne’s first Catholic priest, and Clara Geoghegan on George Henry Backhaus, first priest of Bendigo. Catholic education is another notable theme, such as in Lesley Always’ chapter on Patrick Scanlan, founder of Melbourne’s St Patrick’s College. Meanwhile, Shane Carmody studies the Melbourne Jesuit Mission. Colin Nettelbeck does the same for Notre Dame de Sion Sisters, linked to Goold’s successor James Corbett. Catherine Kovesi adopts the lens of gender history in both volumes: first, exploring Ursula Frayne, Mother Superior of the Sisters of Mercy, and then, The Convent of the Good Shepherd at Abbotsford.

Concentrating on arts and culture along with the institution of the Catholic Church, the volumes largely omit social and particularly First Peoples histories. For example, the everyday congregant, the school student, and the generous benefactor – communities and their places and streets – along with imbalances of power between social groups – are not an emphasis. The key oversight is, however, the disengagement from First Peoples history. We just learn that Goold had a book in his library on Victoria’s Indigenous peoples. Future inquiry into Goold and the Catholic Church would make a greater contribution to historical scholarship by adopting Indigenous, post-colonial and ‘history-from-below’ perspectives.

The Invention of Melbourne (2019) and The Architecture of Devotion (2021) are major contributions to the literature. They are important texts for historians focussed on nineteenth-century Australia and particularly its cultural and spiritual life. Suited to their subject, both volumes are beautiful material objects, boasting high-quality paper, ink and typesetting, and replete with glorious illustrations of paintings, sketches, architecture and photography. Benefactors contributed to the production of the volumes. Both are a collector’s item suited to personal and public libraries.